The Secret Adventures of Jules Verne 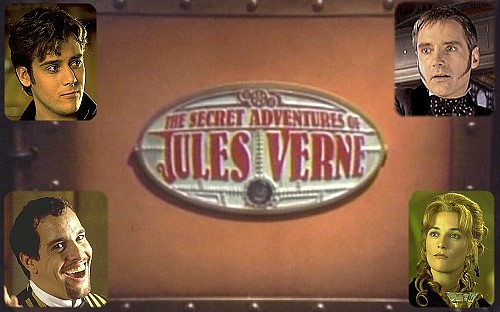 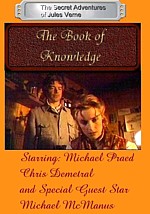 DOWNLOAD A ZIP FILE OF PICS FROM THE EPISODE HERE

BELOW IS A SYNOPSIS OF THE EPISODE. 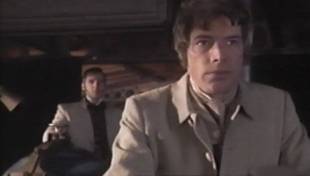 Location of Aurora: Tangiers to Corsica

Prologue: Rebecca, Phileas, Passepartout, and Jules are having a festive dinner at a restaurant in Tangiers, where they are joined by famed doctor and explorer Sir Nigel Harwell. During the dinner, Jules collapses. Back on the Aurora, Sir Nigel diagnoses Jules' jaundiced condition as Yellow Fever.

Sir Nigel explains that Jules needs a hospital, but London is too far away and the hospital in Tangiers is too unhealthy. He suggests that they go to a hospital he knows in Corsica which would be closer and healthier. So the Aurora changes course while the Foggs and Passepartout prepare to help the doctor with Jules' care.

The Yellow Fever is causing Jules to have fevered dreams. He dreams he is on the Aurora but when he opens a door on the ship, he sees the League of Darkness' giant mole tunneling through Paris. The scene changes to a dark city street where a ghostly figure is chasing Jules. As he pauses, he sees in the windows of the town glimpses at the adventures he has been involved in. He sees Alexandre Dumas discussing his plans for the Phoenix, he sees himself explaining to his friend Felix his plans for the city of the future. He sees the giant gun that was being built by Count Kugarin in Russia, and sees himself and Passepartout discussing building machines with minds of their own. He sees the League of Darkness ship Prometheus and the rocket packs invented by Duke Rimini. And he sees Count Gregory come together with fusion power. Then a door opens on this dream street and his mentor Arago appears with a Book. The book floats through the air to land at Jules' feet. On its cover is printed "Book of Knowledge". Arago demands that Jules open the book, but Jules refuses.

Back in the real Aurora, Jules surfaces from his delirium slightly, but instead of Passepartout, he sees Passepartout possessed by Lazarus and becomes very anxious. Sir Nigel sends Passepartout away to fetch more ice as he prepares a drug for his patient. He also takes a moment to look around the room, and at Jules' drawings and his notebook.

In the main cabin of the Aurora, Phileas complains that he doesn't trust Sir Nigel. But Rebecca says that she finds him fascinating. Sir Nigel is a doctor, writer, and explorer. He has even entered Mecca disguised as an Arab, Rebecca says. Phileas points out that that makes him devious. Rebecca counters that Phileas is miffed because the British Geographic Union honored Sir Nigel for being the first person to cross the Sahara. Phileas says he himself went across before Sir Nigel, but Rebecca reminds him that it was in the air and with a brandy in his hand.

The doctor is working on his drugs when Phileas visits Jules. Jules comes to briefly but sees Phileas as he first saw him, when Phileas broke into his garret and beat him up. The images switch to those of the brainwashed Phileas fighting them in the Scottish castle, then to the argument they had in Russia after Phileas lost the card game and Passepartout. When Jules dips into unconsciousness again, he sees himself in a cafe with a bar. Images of other times when he was in a cafe flash before him, of talking to his friend Dumas about opening the door to his imagination, of talking to his fellow Parisian artists of his visions of the future. Then he is back in the dream bar and Phileas appears behind the bar, drunk. He asks Jules about the Book of Knowledge that appears on the table there and says he should read it.

Back on the Aurora, Phileas holds Jules down as Sir Nigel injects him with the drug. After Phileas leaves, the doctor mutters with a smile that Jules' condition will almost certainly grow worse.

Now Jules is dreaming of the women he's met. Rebecca appears in his dream garret and reminds him how lonely he must be, writing all alone. He remembers many women he has met: his neighbor Angelique, one of Dumas' women whom he met in Dumas' rooms, the countess who lured him on board the Prometheus, the young woman Natasha from Russia, and the student in Paris who led him to the League of Darkness' trap. The dream Rebecca says that she could love him and drive every other woman from his mind. Visions of Rebecca appear: helping her get dressed in Georgia when she was hurt, twirling in her seventeenth century gown. The dream Rebecca asks if he writes his ideas in the book and tries to get him to open it. Suddenly she becomes the spider queen.

Jules wakes briefly and asks for his book. As he goes under again, Passepartout discovers that Jules' notebook is missing.

In the main cabin of the Aurora, Phileas explains to Sir Nigel that Passepartout has asked to accompany Jules, but the doctor says that is not possible. The hospital they will be going to has many cases of virulent disease, and only doctors and patients are allowed.

Jules dreams once more of the mole. In the dream, Arago appears with the Book again. He explains to Jules that it is the wellspring of all knowledge, that it contains information on tools, medicines, inventions, feats of engineering, works of art, all that has been and ever will be, and only Jules can read it. Jules remembers hearing the countess on board the Prometheus saying that he was needed for his ideas and visions, then remembers Count Gregory saying that Jules doesn't realize the extent of the visions he has. Suddenly the image of Arago becomes that of Sir Nigel who is telling him to open the book.

As they are leaving the Aurora, Sir Nigel sedates Jules. Despite the doctor's objections, Passepartout insists on going with Jules to the hospital. When they arrive at the hospital, Passepartout sees that there are two League of Darkness workers in the room before he is drugged unconscious. Jules is tied down to the bed and they inject him with an hallucinogen. The doctor explains that he wants Jules' visions of the future.

As the hallucinogen takes affect, Jules sees images of some of the horrors he's witnesses: Count Gregory's brain machine, the League of Darkness ship the Prometheus, Rebecca strapped to a rocket and shot out of a cave, the mole breaking through the street, and the war machine version of the Phoenix killing soldiers. Suddenly Passepartout enters his dream. He asks him about the Book of Knowledge. When Jules refuses to pick it up, dream Phileas and dream Rebecca join dream Passepartout to demand that he open the book. Jules explains that Sir Nigel is after the book because he is a member of the League of Darkness.

On board the Aurora, Phileas complains again about Sir Nigel not being trustworthy. Rebecca realizes that Jules notebook is still missing. The Foggs decide to go through the doctor's things he had left on board and discover some of Jules' drawings. They realize that Sir Nigel is indeed a thief and that they need to rescue their friends.

Jules dreams of Passepartout being tortured but realizes that it is all an allusion. Arago appears and offers Jules his hand. In the hospital, Jules is in a deep sleep that Sir Nigel can't pull him out of. Eventually, Jules wakes up to an empty room and slowly sits up. He sees Passepartout regaining consciousness on the floor and moves to help him up. Just as they leave the room, a great explosion by the main doors occurs and in blasts the heavily-armed Foggs. Jules and Passepartout dive out of the line of fire. Jules has images of other fights he has seen. After a while there is quiet, and Jules and Passepartout stand up. The Foggs have vanquished everyone except Sir Nigel, who is lighting a stick of dynamite. They are out of ammunition, but they pin Sir Nigel to the wall with knives, leaving the burning dynamite at his feet. The foursome leave the building just before the explosion.

In a final dream sequence, Jules wakes in his garret and finds Arago there. Arago says that is is safe now for Jules to open the book. Jules complies and a glowing atomic image appears. Arago explains that Jules opened the book, and that he can only help Jules make use of what he sees. Jules questions how he can make use of these things by writing stories. Arago replies that stories are signposts to help the world choose light over darkness. He warns Jules to beware the darkness.

Jules awakens and he is back on the Aurora with Rebecca, Phileas and Passepartout gathered around his bed. They hand him his notebook and Rebecca explains that he asked for it in his sleep. Phileas says the notebook is precious to everyone, that it holds the future. Jules sees the image of Arago for a moment and smiles.