PLOT DESCRIPTIONIn 1982, five young left-wing extremist shook up the Canadian government and its people by bombing a power plant, destroying a Litton Industries plant that made cruise missile guidance systems and firebombing several pornographic video stores. Based on interviews with one of the convicted bombers and wiretap transcripts, this made for Canadian television drama tells their story. ~ Sandra Brennan, All Movie Guide

THE SOUND AND THE SILENCE 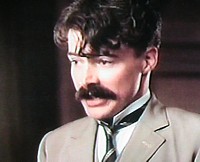 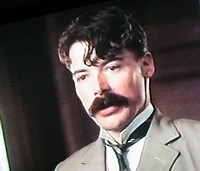 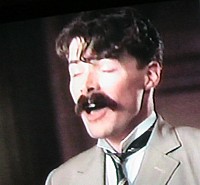 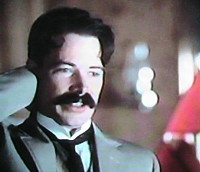 THE SOUND AND THE SILENCE (TVMS)  * *  setting: USA/other/CDN
(1992) (/Ireland/New Zealand) John Bach, Ian Bannen, Brenda Fricker, Vanessa Vaughan.....Story of the life of Alexander Graham Bell (Bach), his relationship with his deaf wife and his many inventions, including the telephone. Flat, often disjointed bio is made watchable by its fascinating subject but not much more. Won three Geminis. 4 hours. sc: Tony Foster, William Schmidt, J.K. Harrison. dir: John Kent Harrison.

SOUND AND THE SILENCE, THE STORY OF ALEXANDER GRAHAM BELL, 1993

biography of the inventor Alexander Graham Bell, and his struggle with his inventions.

NOTHING SACRED   * * 1/2  setting: other
(1995) Eric Peterson, Sonja Smits, Randy Hughson, David Storch, Michael Hogan, Michael McManus, Peter Blais, Linda Prystawska.....Story of family, love and revolutionary politics set in 1859 Russia and revolving around the visit of a man and his radical friend to his father's fallen-on-rough-times estate.  Staged-for-CBC TV version of the critically acclaimed comedy-drama.  Unfortunately, the actors still seem to think their on stage, delivering overly broad performances as though in a poor sitcom.  And the play itself lacks real heart and is more cute than funny, but it's briskly paced and there's often something appealing about the talkiness of filmed plays.  Ironically, this adaptation of a Russian novel was once voted best new Canadian play -- a sad comment on Canadian culture.  sc: the play by George F. Walker (from the novel Fathers and Sons by Ivan Turgenev). dir. for the stage: George F. Walker, Patrick McDonald; dir. for TV: Robert Sherrin.

THE KILLING GROUND * * * 1/2  setting: other
(1988).....Documentary about Canada's involvement in the first World War as told by journalist Terrence MacKenna with monologues by actors reading real-life letters and reports.  A tough, gritty look at the horrors of war and governments' disregard for their own people.  sc./dir: Terrence & Brian McKenna.