CHECK BACK ON THIS PAGE FOR UPDATES AND STAY LEXXY !! 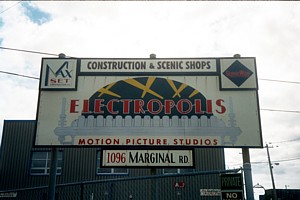 Site for all 4 seasons of Lexx filming

Traditionally, the cast and crew would gather for a final 'Wrap Shot' after the last scene was filmed for each Season

Since 1999, there have been conventions for the purpose of Lexx fans coming together to meet and greet the cast and writers. One of the biggest differences

between the organized Sci-fi conventions and Lexx was that the fans made the arrangements for the most part, and in cooperation with Paul Donovan,

Salter Street Studios and the cast members from the show, organized their own conventions for several years. They named it the 'UNCON', since it was highly

unconventional to organize a fan meeting in this way.

The cast and crew participated on a level completely unheard of in the entertainment industry, and it earned them the respect and undying loyalty of the numerous fans worldwide.

organization. Here are some of the numerous fan posters made for Lexx conventions, both fan-generated and the national convention promoters.

ARTWORK CREDITS: CARTOON POSTERS FOR HOGGCON AND UNCON 2000 AND 2001 ARE BY LEXX FAN 'GHOUL', MEGACON AND TIMELESS DESTINATIONS POSTERS BY MAYAXIONG

IF ANYONE HAS AN ITEM OF ARTWORK HERE THAT HAS NOT REC'D CREDIT, PLEASE CONTACT ME FOR CREDIT PLACEMENT, THANKS.

MAKE SURE TO CHECK THE MEGACON CONVENTION PAGES FOR PICS AND INTERVIEWS.

Thanks for visiting the Lexx section of the website.

THANKS TO ALL OF THOSE DIE-HARD COLLECTORS THAT CONTRIBUTED THEIR PICS FOR THE ENJOYMENT OF THE FANS.