BEHIND THE SCENES OF:

To see some pics of the Making of Lexx Season 3 by Gerold Schmidt, click on the LINK

Nothing was as iconic as the 'Rainbow' Brunnen G costume used in both Seasons 1 and 2.

The costume made it's debut in the first movie, "I Worship His Shadow", and portrayed Kai as the

another appearance in Season 4's 'Trip'.

'Divine Assassin' uniform wore by Kai for the majority of the rest of the 4 series. The costume was the same in

construct, but the colors had been muted to dark grays and blacks to indicate a corrosion and perversion of the

original colorful Brunnen G costume. This costume was all hand-made silk and wool, one of a kind and extremely expensive.

When Salter Street closed its doors several years ago and sold off the majority of the costumes, this one was purchased

by a devoted fan and kept intact.

There are several other Brunnen G characters costumes in collections as well. 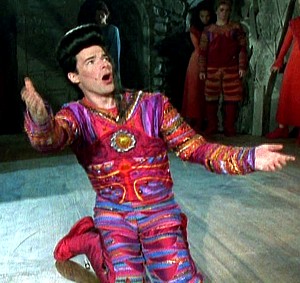 Follow the link above to a page of Brigadoom pictures

Easily the most recognizable Scif-Fi costume on television, the uniform boasted not only incredible workmanship,

but also hardware designed for the use of 'Protoblood' by Kai, the Divine Assassin. Inserted on the jacket front were

coupling nozzles for use to 'refill' blood loss or usage. Many say the idea for the design was inspired by

Tim Burton's 'Edward Scissorhands', but no one has any definite proof of that. Also the hair-do, called the 'Bun',

was also highly associated with this show, as no other show had such extreme hair designs for it's male characters.

It's been copied in fashion shows and artwork and is a fan favorite.

There were originally 2 of these costumes made, one was designed for hard usage and the other one when the first one

basically started falling apart. Michael McManus has the remaining original, and it has never been sold to fans nor is it likely it will be.

The boots were custom hand-made  for Michael and were reported to be incredibly comfortable. 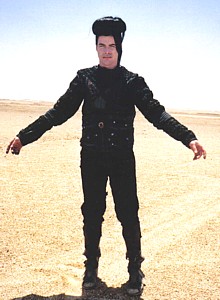 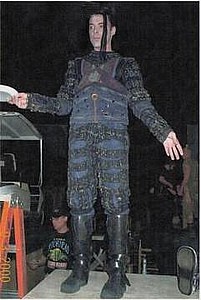 Nothing was quite as provocative as the 'Water' planet's version of Kai in his hunting outfit, nicknamed the 'Little Blue Dress'.

Designed from a Greek standpoint, and using Japanese bamboo bow and arrows, this leather-appointed costume and sandals

was extremely popular with fans and a coveted item for sale when Salter Street sold off the costumes.

It consisted of 2 piece clothing: a wrap-skirt and a wrap sleeveless overshirt, with hand-tooled leather belt, bow quiver, sandals and pouches.

The hair accessory for this costume was a highly curled and stylized version of the regular 'Kai' bun and hair extensions. 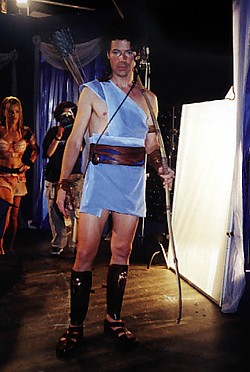 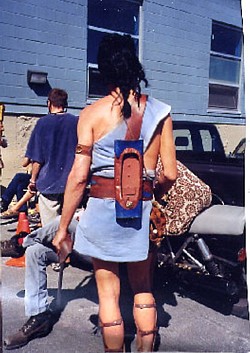 In Season 4, the crew has escaped to Earth, where numerous members of Fire and Water have been re-incarnated.

Kai turns up as an impoverished and mentally unstable actor, and turns in a one-man play of Henry V.

Here are the different costumes for that episode, and there are more Kai costume changes in this one episode than all of Season 2. 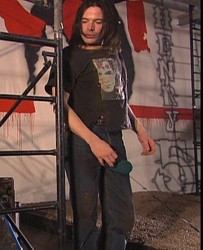 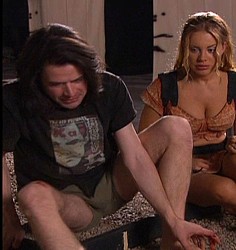 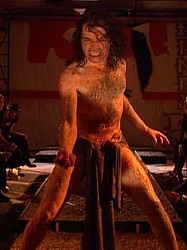 The first costume is a t-shirt and jeans, the shirt designed after the poster for the play. You can find a t-shirt transfer file of that poster

on the Downloads page. The shorts and loin-cloth did not make it for sale, but the jeans and shirt did manage to get sold at the Lexx auction.

There are a few cameos during the filming that sometimes get overlooked. Fortunately for this costumed shot, they kept the costume and

actually ended up selling it. The only other costumed cameo is from Season 4's 'Texx Lexx', and it involves a cowboy hat, jeans and shirt,

but that never got sold or was documented.

This cameo takes place at the Gulleen family reunion, where the late renowned actor, Maury Chaykin, is a hillbilly patriarch, hosting a

hoe-down, complete with Xev as appetizer. Michael has a quick cameo as a redneck party-goer member of the Clan. This costume consists of scruffy jeans,

The hair designs for Kai's bun took on many changes during subsequent episodes. From the beginning of the season, the 'bun' part of the hairdo was very big,

and puffy, but as the seasons progressed, the bun began to get smaller and smaller with each season. Although there were some variations on the style, it stayed pretty

the same until the series finale.  These are some of the different variations and styles used throughout the series. 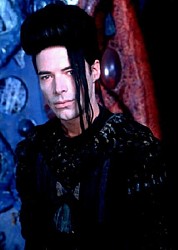 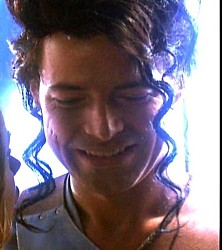 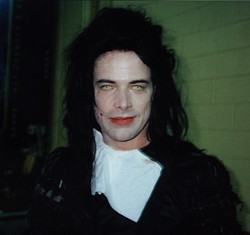 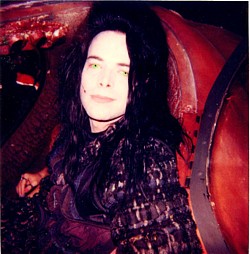 There are one or two  costumes that were either never sold or fell apart before the end of filming, here are a few: 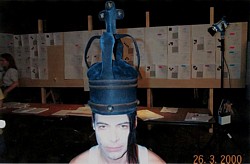 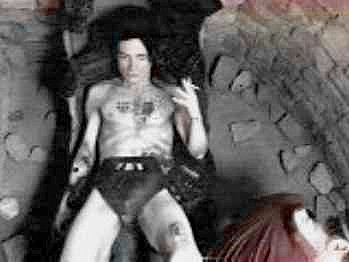 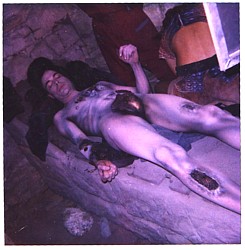 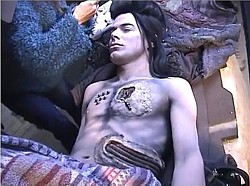 The infamous codpiece scene was legendary for Season 3, as they used a smoking canister under for filming

Here's a shot of Michael enjoying his own smoke during break.

The Brace was an incredibly effective weapon, grafted to Kai's own arm and dispatched by flexing his wrist at an opponent.

Apparently it was incredibly accurate and could decapitate an enemy so quickly it couldn't be seen to fly.

Here are some examples of the brace, the cuff and with the cables

Go to the next page for part 3 of LEXX

Sets, Props and the Wrap shots