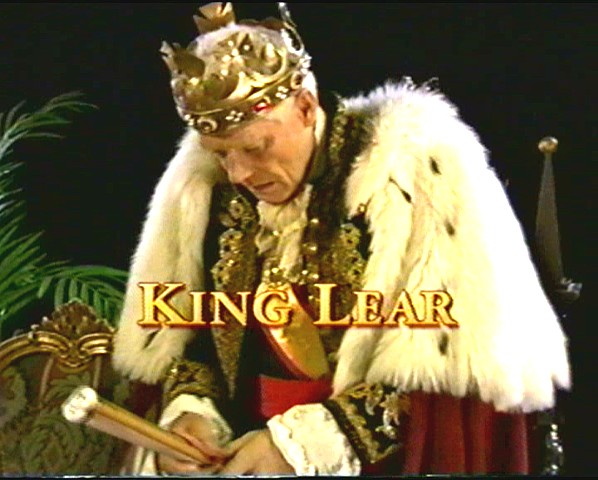 Unlike Hamlet and Romeo and Juliet - the two Tragedies concerned with youth in our Taste of Shakespeare series - King Lear is a Tragedy of old age. More specifically it is about the time in a father's life when his children, for good or ill, by gift or through force, acquire power over him and he has no choice but to submit or leave.

When Lear's two daughters band together to strip their father of all respect and dignity, the old man, taken to the ends of endurance, takes to the open road on a stormy night accompanied only by his trusty servant and his faithful Fool. Losing his home, his way and his wits, Lear begins to look squarely at the misery of the outcast poor and the cruel hypocrisy of those with power in the world. In his attempt to "feel what wretches feel," he bares his chest to the wind and rain, and in his madness he crowns himself with a circlet of flowers. The pain in the play is almost too much for an audience to bear, but Shakespeare's magnificent poetry and the kindness of the few good characters makes the story endurable. King Lear will never go out of date because the exchange of power between parent and child is repeated in every generation and every home. And if this transfer of power takes place without empathy and love, the tragedy of Lear will be repeated as well. Although some lucky few in the audience will be unable to see the relevance of this savage play to their own protected lives, with the passage of time they inevitably will.

Set and costume design for "A Taste of Shakespeare: King Lear" is by CAMERON PORTEOUS, who was Head of Design at Ontario's Shaw Theatre Festival for 17 years. He has also designed sets and costumes for theatre and opera across Canada, and was Production Designer for all of Devine Entertainment's Artist, Inventor and Composer films, including "Beethoven Lives Upstairs", for which he won an Emmy Award

To meet the challenge of how to represent the world of King Lear, we look to the play and its central character for inspiration. While the king must deal with the real world when it comes to winning wars, he spends much of his time in a world of power, flattery and privilege that is quite unreal. 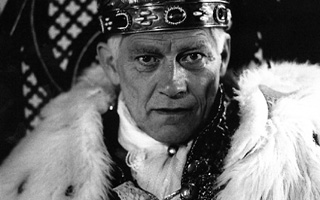 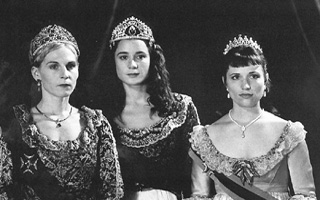 But in this play, this king eventually has to deal with the real world when he is unceremoniously dumped into it. From the protected berth, he then must deal with weather and nature, finding in them insight as well as misery. So we decided to visually move the king from a stylized world to a real one, as that is what happens to him. The first half of the script was shot in a studio and the second half outside. The link is the storm sequence, in which the outside world impinges on the inside. 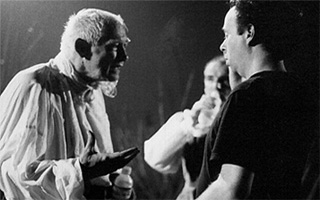 The opening scenes are shot in limbo with only the key trappings of castle and home - throne, gate, servants, desk, candles. As Lear is thrust into the storm, forced into his own mind and the world's chaos, we give him a combination of natural and unnatural sights and sounds to represent this fusion. But after society has been shattered by the worst of man's nature - the blinding of Gloucester - and the king is on his own, without even the comfort of companions, we take the camera to the natural world and leave the safe studio behind. We open ourselves to nature along with Lear. We got luckier than he did: a foggy day at the bottom of the Scarborough Bluffs didn't let us see the cliffs but gave our images a magic quality. And then a sunny day at Toronto's beaches let us see our prison (actually the Waterworks) and gave the end of the play - shot as the sun went down - the natural progression of the sunset. 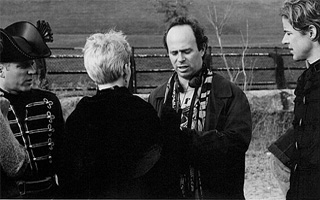 The shock of the storm and Lear's refusal to give in to its power leads to his realization that there are people who have to deal with this every day. Before his death, Lear - who has given away his golden crown - fashions a new one out of leaves and flowers, and faces the hypocrisy of the world.

Winner of the Bronze Plaque, Humanities Division
at the Columbus International Film & Video Festival Synopsis from 'A Taste of Shakespeare' site

Here is a link to some video CLIPS of the film.

Here are some VIDCAPS from the film: