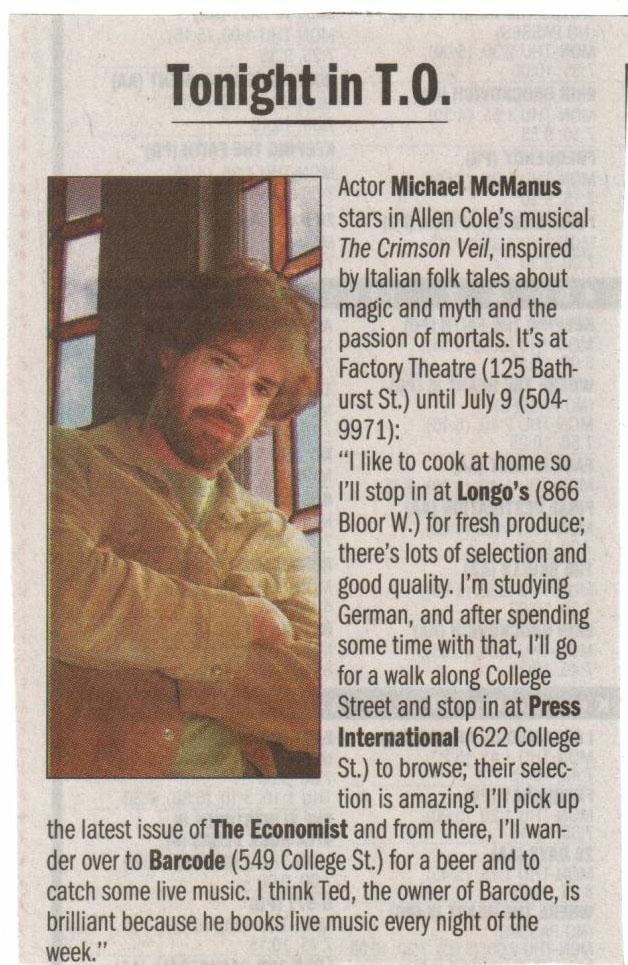 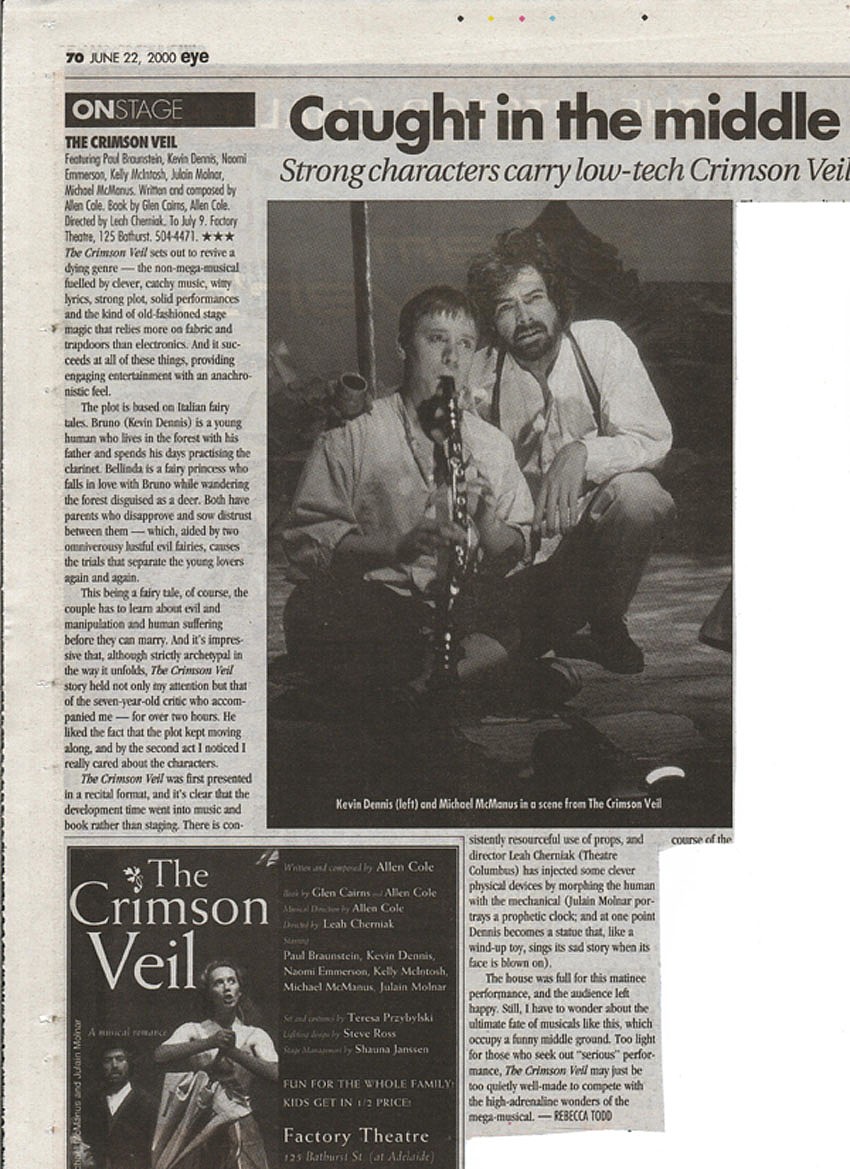 CLICK ON EACH PICTURE TO GET A FULL SIZE VERSION. 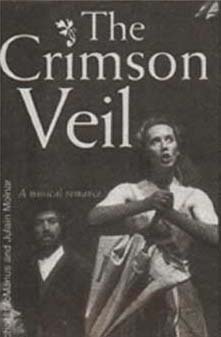 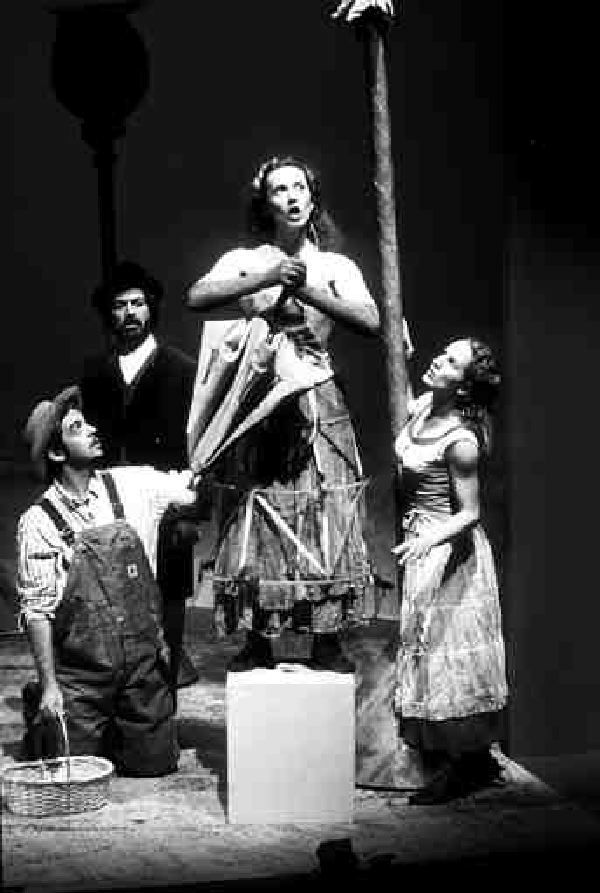 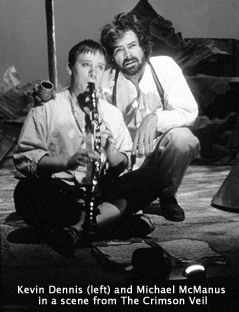 Click on the links below for the ful page articles.

Caught in the middle

The Crimson Veil sets out to revive a dying genre -- the non-mega-musical fuelled by clever, catchy music, witty lyrics, strong plot, solid performances and the kind of old-fashioned stage magic that relies more on fabric and trapdoors than electronics. And it succeeds at all of these things, providing engaging entertainment with an anachronistic feel.

The plot is based on Italian fairy tales. Bruno (Kevin Dennis) is a young human who lives in the forest with his father and spends his days practising the clarinet. Bellinda is a fairy princess who falls in love with Bruno while wandering the forest disguised as a deer. Both have parents who disapprove and sow distrust between them -- which, aided by two omniverousy lustful evil fairies, causes the trials that separate the young lovers again and again.

This being a fairy tale, of course, the couple has to learn about evil and manipulation and human suffering before they can marry. And it's impressive that, although strictly archetypal in the way it unfolds, The Crimson Veil story held not only my attention but that of the seven-year-old critic who accompanied me -- for over two hours. He liked the fact that the plot kept moving along, and by the second act I noticed I really cared about the characters.

The Crimson Veil was first presented in a recital format, and it's clear that the development time went into music and book rather than staging. There is consistently resourceful use of props, and director Leah Cherniak (Theatre Columbus) has injected some clever physical devices by morphing the human with the mechanical (Julain Molnar portrays a prophetic clock; and at one point Dennis becomes a statue that, like a wind-up toy, sings its sad story when its face is blown on).

The house was full for this matinee performance, and the audience left happy. Still, I have to wonder about the ultimate fate of musicals like this, which occupy a funny middle ground. Too light for those who seek out "serious" performance, The Crimson Veil may just be too quietly well-made to compete with the high-adrenaline wonders of the mega-musical. -- REBECCA TODD </contributors/rebecca_todd/>

At two and a half melody less, repetitive hours, Allen Cole and Glen Cairns's The Crimson Veil feels like a designer straitjacket. Nice looking, but a tad constricting.

Set in an enchanted Italian forest, this musical fairy tale for adults tells what happens when a young clarinet-playing mortal named Bruno (Kevin Dennis) meets and falls in love with a fairy princess (Naomi Emmerson). Not only are their respective single parents unhappy (Michael McManus and the always thrilling Julain Molnar), but a pair of incestuous evil faeries (Kelly McIntosh and Paul Braunstein) are on their tails as well.

Call it A Midsummer Night's Magic Flute, with music and lyrics by Weill and Brecht.

Derivative? Of course. I have no problem with that. Everything's derivative. Shallow characters? Yes. This is a fairy tale, not Hamlet.

What's disappointing is how clumsily composer/writer Cole and co-writer Cairns have put together the book. Motivation in fairy tales is all-important. Villains want things, heroes stand for something and we all expect good to triumph over evil.

In The Crimson Veil it's never clear who wants what or why, which makes the show confusing and puts our sympathies on hold.

Add to this the complete lack of memorable tunes and you've got a show wandering the forest looking for something to sing about and someone to hear it.

Molnar's fairy is given an off-the-page complexity thanks to her empathy and full-throated mezzo, while McIntosh and Braunstein make up for the lack of plot by joking around like Angelina Jolie and bro at the Oscars.