Any other publications are deemed without authorization without prior permission.

This interview has been edited only for punctuation and grammar. 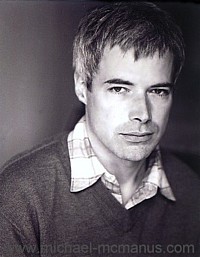 1.    What projects have you been doing this past couple of years, and what did you enjoy the most about them? 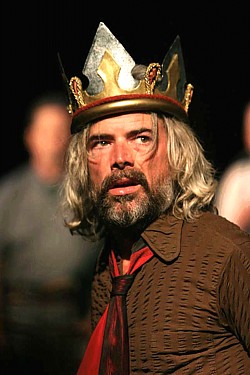 I've been doing very little acting in the last few years. Macbeth was certainly the highlight in every way. The cast was good, the director was inventive and prepared, and it is a production I would love to revisit and one of my favorite roles ever.

2.    What playwrights or directors would you most like to work with?

A hard question. It feels a bit too late in the day to chase down favorite directors. That would be too much to ask. When I think about wading back into the fray i would be happy to work with competent directors. My hero directors are Elizabeth Lacompte and Frank Castorf. Of Canadian stage directors I like François Girard.

3.    If offered a Broadway 'big name' musical, would you consider it or do you favor more 'independent' productions?

I don't have anything against Broadway musicals. Can’t see it somehow but whether I’d say 'yes' is huge speculation. I’ve said 'no' to musicals before but never to a really big production.

4.    What do you think of the current state of Canadian theatre? Do you have any ideas for improvement?

A good question. I can only really comment on Toronto and Ontario theatre. It is to me a shambles and I puzzle over how to make a contribution without just adding to the problem. 'Straight’ theatre is in terrible shape.

Improvement might come from some combination of more time, money and more skill\talent; where those things are going to come from is anybody's guess.

5.    What book(s) would you most like see made into a theatrical production?

6.    Have you written anything of your own and if so, would you want to direct it yourself?

I don't think much of my own writing; if I did write something for film or theatre I would certainly have to direct as nobody else would have a clue what it was about. In my experiment in film making from a while ago it also seemed unnecessary to write all of the dialogue if you are directing it yourself and know what a scene needs.

7.    Would you consider doing a play version of any of Nigel Bennett's books co-written with P.N. Elrod?

8.    What was the film you were scheduled to do in Germany before the producer had to cancel the project?

I don't feel I can disclose all the dirty details but I can tell you that the producer\director\writer was Mr. Donovan who produced Lexx. It was a B- movie-style script; some sex, violence and a large dose of religion!

9.    Are there any other film projects you'd like to join?

There probably are but I haven't been looking for work recently. I’ve been doing the work that finds me. Locally I haven't read or seen anything that makes me want to be a working actor.

10.     If you had the offer for another TV series, would you prefer it in the Scifi genre or something completely different?

A good western would be my pick. Sci-fi is okay, it mostly depends on the writing and directing. If i get to do another series just make it an interesting one. It’s a long time to spend with character.

1.    During 'Fluffdaddy', "Live Kai" expounds on the obsession of some of his fans, do you see yourself in a parallel to that problem, and did you help write that part of the script yourself?

I didn't write it myself and the identification with the character of Live Kai is not one for one. I believe that J Hirschfield was using what he knew about me (a lot) and blowing it up into a satire of--ME. Very clever, and enjoyable, and difficult. That’s what I suspect but you can ask him. The episode was way too long so not Live Kai’s entire subplot made it in. When we were filming it I did turn into Live Kai. Not everybody was thrilled with my personality during that part of shooting.

My main contribution to Live Kai was to ask for Henry the Fifth instead of Hamlet as the one-man play. It seemed more appropriate to the character and uncommon to theatre; there have been many one man Hamlet's, no Henry’s that I know of. 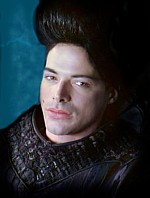 Michael as Kai in Season 1

2.    Did you ever consider that this show would be such a cult classic?

When we toasted the beginning of the project, Brian, P Donovan, R Siegl and me, there was a feeling that it could be very, very successful. My feeling is that it achieved some of that success. The cult status is cool, the classic has to wait a few years yet.

3.    Do you agree that the character of 'Kai' is a metaphor for a 'Destroyer/Messiah' godlike entity comparison to several ancient religions?

I read Oliver Sack's book about autism: “An Anthropoligist on Mars”. He talks about the attachment some autistic people feel towards the unfeeling Spock and calls him the 'mandatory autistic character in a Sci-fi narrative,' or something to that effect. That's more my line of thinking about what the character represents. I also didn't try to 'want to be human' because it really bothered me that 'Data' always wanted to be human which was satirized beautifully in 790's little brain chip.

4.    Have you had any contact with Paul D lately regarding any future projects, and would you like to work with him again?

See 8. above...of the people I know he is the most alarmed at the extent to which I have removed myself from the scene.

5.    Would you have liked Kai's character to develop more in the series, or were you happy with the way things wrapped up?

I couldn't be happier with the arc of my character through the series. I like the way it ended. a little Deus Ex Machina was just the thing for 65 hours of TV.

6.    We heard that you lobbied for the series to end with Season 4, how did that come about?

That's not quite accurate: P Donovan was wrapping the series once the earth was destroyed. I lobbied heavily and successfully for the chess episode, wanting my character to find an ending with the end of the series.

7.    If you could have made changes to the series yourself to improve it, what suggestions would you have made, or did you?

I was never shy about expressing my opinion. Most beneficial would have been to continue through the years without really big breaks of time in between. That wasn't possible but I expect that doing in four years what it took us six years to do would have been a big advantage.

8.    Do you believe in the show's premise of reincarnation ?

I would say that reincarnation in the show is a conceit rather than a premise--not to nit-pick. Personally I haven't seen any evidence of reincarnation. People of many religions believe it but I have to say I don't.

1.    Lots of actors go to great lengths to preserve their on-screen 'appearance'. Would you ever consider doing any plastic surgery or other procedures to prolong that appearance?

It is more and more common. I'm not comfortable with face surgery. I don't like looking at it so I think it would have to be something extreme for me to go under a knife for cosmetic reasons.

2.    What authors have you been reading lately ?

3.    What kind of music are you currently listening to?

4.    Is golf still a main pastime and if so, what's your handicap these days?

Golf's competition these days is squash which I also love and am much better at. My golf handicap remains embarrassing but as I was told by a friend of mine recently when I connect with the ball I hit it beautifully. I'm going to try to lower my score this summer so I will tell you what my handicap is in October!!

5.    Any news of any possible conventions in the near future, and do you still want to do them?

I DO want to do conventions, I'm just being horribly disorganized about it. I will get the ball rolling. It's a question of 'when'. It always is with a guy like me.

6. Would you ever consider doing your own political radio program?

What are your thoughts on the current US political situation?

It would be wonderful to host a radio show. I have no idea if I have the gift. I idolize Terri Gross from NPR. I've been an Obama fan since Iowa, can't wait to see how all the unraveling gets glued back together. Was relieved when Bushco left the field.

?? --let's say five. In five years I want to be acting regularly in Canada and the US, playing golf to a nine handicap, performing once a month at least with a quartet--bass, drums, violin and piano, and I want to find myself in the arms of a loving woman getting it right for the first time in my life!

Thanks to Michael for taking the time out to answer our questions and for being so candid in his responses.