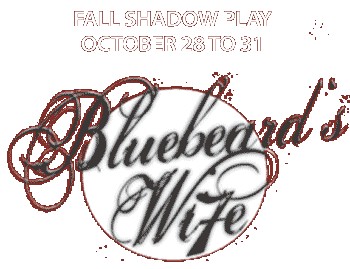 It’s All Hallow’s Eve, and Cora is getting married to the most eligible widower in town. He’s a handsome old devil, got a big house, lots of horses, and a nasty secret… but hold on big boy, Cora’s got a secret of her own! It’s a showdown of the sexes in a house of horrors - the knives are out and it’s going to get messy!

AND BRINGING BACK THE 5TH ANNUAL

This October, celebrate the spookiest time of the year by coming out for some fun-filled Farm Macabre. The fright-filled Walk of Terror will lead you to the Shadow Theatre, where a Halloween inspired horror show will unfold before you… grab the popcorn and get ready! 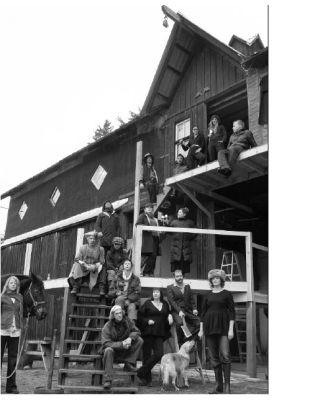 During Caravan Farm Theatre’s production of Bluebeard’s Wife, a shadow play based on the fairytale of the serial-killing husband, it is night time, outdoors and Halloween. Never mind a playwright, Tara Beagan, who wants the mythical man to pay.

“There’s a bit of a timing thing going on for Bluebeard. She’s taking the serial killer to task,” said Kelly McIntosh, directing the play which opens Tuesday.

Bluebeard is the title character in a tale about an ugly aristocrat whose wives keep disappearing until the newest female to take his last name finds out where they’ve all gone.

Caravan commissioned Toronto writer Beagan to create an original work based on the legend of Bluebeard. McIntosh said the shadow play is his story as we know it, but with a twist.

“The writer was interested in exploring the idea that at some point in Bluebeard’s life, he would have to repent for his sins,” she said. This is McIntosh’s third Halloween show and her second time directing one.

“What’s happening is year by year, they’re getting bigger,” said McIntosh, who, as an actor was last seen in Caravan’s Macbeth as Lady Macbeth two summers ago.

The Torontonian first came out to the farm with her husband and then artistic director Allen Cole in the early ‘90s. After coming back to Caravan in 2007, she “became a Caravaner.”

Focusing her efforts there on the shadow genre, having more room for creativity and cleverness, has its moments.

“Being as imaginative as you can be is a great challenge,” she said, arms rested above a sort of blueprint for the play, being staged in the farm building called the designery.

A white screen will hang from its tip with the actors making movements behind it, and in a departure from most shadow plays, in front of it too.

“There’s four actors and a lot of onstage action. It’s more of a play with shadow than a shadow play,” said McIntosh, adding the shadow effect is handy for some of the play’s more gory moments.

“It’s a way of going into the past and showing violence in an expressionistic way,” said McIntosh, quoting a particularly horrific line:

“Her heart was torn out/ It was ripped out her throat.”

Behind a curtain, the motion has impact but isn’t too tough to stomach, she said.

In the flesh or by voice, Bluebeard’s story comes to life with actors Michael McManus, who played Kai in the science fiction TV show Lexx; Jan Kudelka, returning to Caravan after a decade; Sasa Brown, who starred in The Blue Horse at the farm; and Tomomi Morimoto, a performance artist.

Before every show, audiences will be taken on the infamous Walk of Terror through the woods.

“We want students to get out here and see first-hand what live theatre is really all about,” she said, adding the Halloween show is an ideal introduction for young people.

“It’s got all the right elements – a creepy walk in the dark woods, a fun and macabre shadow play, plus great live music.” 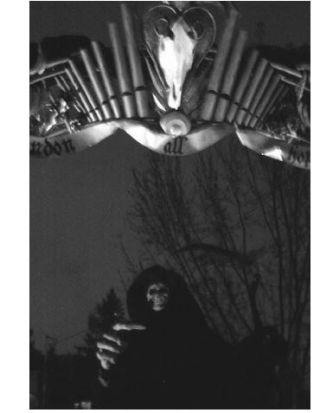 You’ll see blood, guts and gore, babies’ body parts and ghosts riding horses. There’s a headless woman, a cook of extremities, and a violin-wielding witch. And that’s before the curtain even opens on Caravan Farm Theatre’s fall play, Bluebeard’s Wife.

When the aptly-titled Walk of Terror ends guests gather outside what was once a two-story barn and is now the company’s designery.

There, were are greeted by Bluebeard’s maid (Jan Kudelka) who tells us it is All Hallows Eve — a night known for storms and stealing lives at her master’s mansion.

If it seems like the play that follows was written for the farm, that’s because it was.

Commissioned by Toronto playwright Tara Beagan, Bluebeard’s Wife is everything a Caravan Halloween production should be: witty, macabre and a bit bawdy.

It’s as if the lines were written with the actors who carried out the play in mind as well.

It’s hard to imagine anyone else trying to be sexy with steak or cocky eating oatmeal but Michael McManus in the title character. Just like the fairytale, Bluebeard is a serial killer whose wives seem to disappear.

Tonight is his seventh wedding night, and his newest bride (Sasa Brown) can’t stop asking questions about those who preceded her. Brown played the perfect peasant with nothing to offer but her “maidenhood” and the mind to not become her husband’s next victim.

Described as “more of a play with shadow than a shadow play” by director Kelly McIntosh, returning to Caravan for her second shot at the role, the white screens give the play a past and another dimension, one which reels our imaginations in with ease.

Bluebeard’s Wife is narrated in a way by the silhouettes of the first wife, played by performance artist Tomomi Morimoto. Bending like strings are on her back, like a living puppet, Morimoto gives the play a dance to accompany its song.

An eerie soundtrack, created with Player’s organ, upright bass and electric guitar, adds another element to the multi-sensory production.

Bluebeard’s Wife, which offers a somehow surprising ending in a twist to the frightening fairytale, has All Hallows Eve wrapped up on a stage.

If there are parts not fit for children, it’s so well written only the adults will know.

It’s not a long show, but it’s a darn good show. And I can’t think of a better place to be on Halloween.