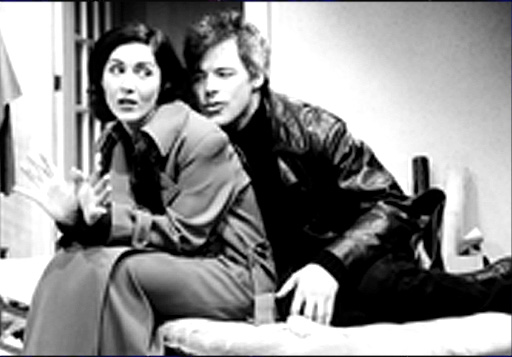 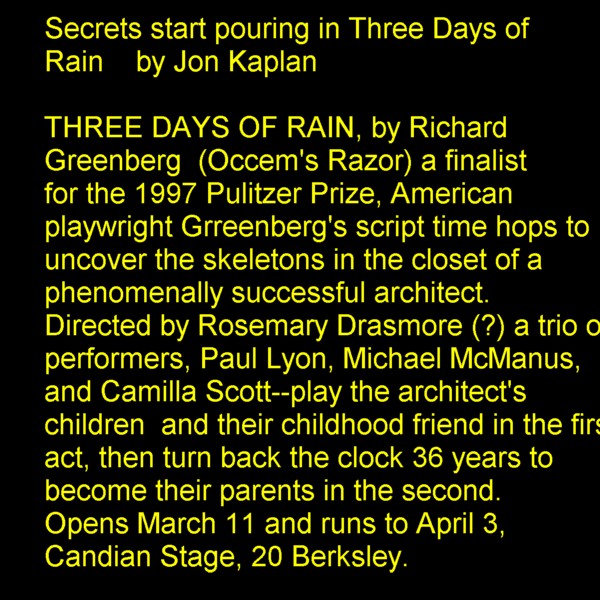 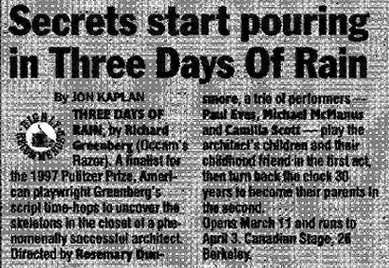 When the sins of the fathers are visited upon the children, that's fate. When they're visited upon the audience, it's just bad theatre. Three Days of Rain's story of two generations of middle-class Americans expects a lot of the audience while giving them little more than snippets of sparkling dialogue and good one-liners in return.

Walker (Michael McManus) is the self-destructive son of a successful architect on his way to a reading of his father's will. He's joined by his sister Nan (Camilla Scott) and childhood friend-turned-TV star Pip (Paul Eves), who is the son of Theo, his father's former business partner. An unexplained reference to "three days of rain" in his father's journal intrigues Walker and triggers the events of the second act, set in '60s New York, where the same actors play out a life-defining chapter in their parents' lives.

The play's biggest mistake is in assuming the audience is as curious as Walker about the content of the journal. We needed to know more about the children in order to care for their dead and mentally unbalanced parents. Rosemary Dunsmore's lacklustre and awkwardly paced production does little to cover the gaps in Richard Greenberg's script (for which he was nominated for a Pulitzer Prize in '98).

It is a script that's dense and verbose at times, and choppy and fragmented at others, like an uneasy combination of Mamet and Pinter. There are some great lines but the whole thing comes across as a snappy episode of Frasier with all the repartee and wit -- not to mention smugness and self-importance -- of the Crane brothers. Greenberg can also be downright banal: "For such a fuck-up, you're incredibly gifted at getting lost," Nan tells her brother at one point. Come again?

As Nan, the Boston housewife, Scott (of The Camilla Scott Show and Days of Our Lives fame) has very little room to manoeuvre, sacrificing her narrative and dramatic space to the conflict (such as it is) between Walker and Pip. There is also a particularly unfortunate moment (postmodernists among you may prefer to call it ironic) when Scott's character admits to Pip that she watches his show in the afternoon when she has nothing better to do!

By contrast, in the second act, Scott gives a thoroughly entertaining turn as mother Lina, a Southern belle as wild and exaggerated as any you'll find in a Tennessee Williams play -- or a half-decent drag show.

Eves is more successful as well-adjusted Pip than as his frustrated and potentially complex father Theo. Only McManus gives completely contrasting and captivating double-turns as father and son. In doing so, he almost saves the day.